Free UK shipping on orders over £100

Malachite is one of the most instantly recognisable of the gemstones, with its distinctive bright green tones and beautiful patterns it instantly brings to mind the greens in found in nature, which explains its name : Malachite comes from the ancient Greek word Malakee meaning resemblance to the leave of the Mallow tree.

MALACHITE THROUGH THE AGES

This is one of the oldest known stones, dating back to use by the Ancient Egyptians around 4000 BC, when it was mined from the Suez and Sinai regions, and here in Britain at the Great Orme mines as far back as 3,800 years ago The Romans and Greeks also used the gemstone for ornaments and jewellery and it remained popular during the middle ages and it was believed to protect against the “Evil Eye” when people thought that the power of bright objects could ward away dark magic. At times in history it was even ground to powder to use as eyeshadow or paint pigment and it covered whole walls as panelling during the reign of the Tzars in Russia.

WHAT PROPERTIES ARE ASSOCIATED WITH MALACHITE?

This gemstone is mainly connected with the idea of protection. Over the years it was worn by people believing it would absorb any negative energy and serve to protect because of its deep connection with nature. The lush green colours of the stone were naturally associated with the bright colours of botanics and the idea of the world bursting into life. Some would attatch the stone to a crib thinking it would protect the child and warn off evil spirits and in some parts of Italy this tradition is continued today by children wearing malachite charms on red cords. It is also said to have healing powers and work to reduce swelling or inflamation as well as stimulate the immune system. Since no two stones look alike it has a unique appeal as early wearers found significance in the patterns and shapes in the stones. 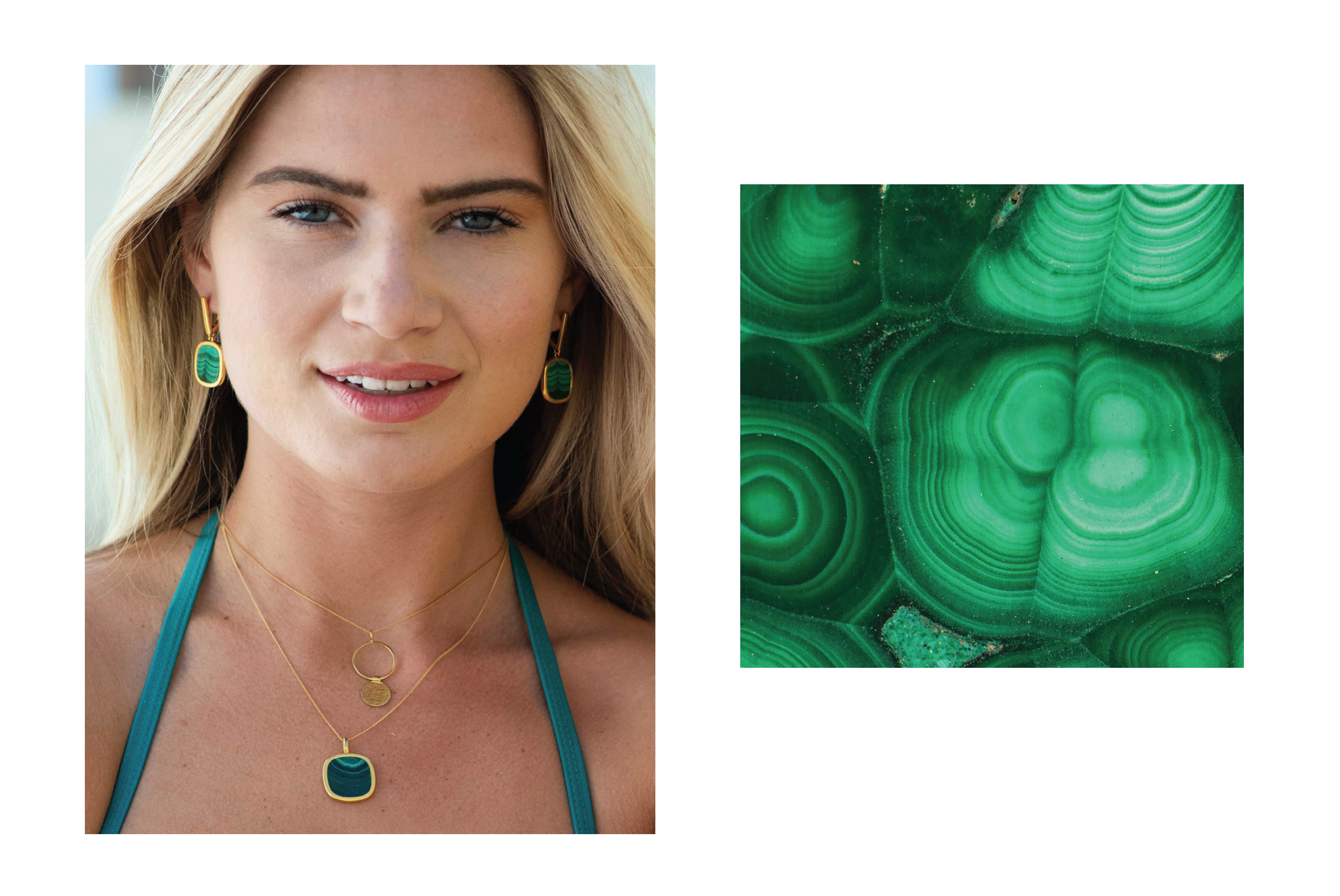 WHERE IS MALACHITE FOUND IN THE WORLD?

Over the years Malachite has been found far and wide but is more commonly sourced today in parts of Africa, Australia, Israel, Mexico and Southwestern USA (most usually in Arizona). It tends to look its best when flat cut to best show off the beautiful natural patterns and lines in the gemstone. It is particularly striking when set in gold and is one of the most eyecatching of the natural minerals available.

This website uses cookies to improve your experience while you navigate through the website. Out of these cookies, the cookies that are categorized as necessary are stored on your browser as they are essential for the working of basic functionalities of the website. We also use third-party cookies that help us analyze and understand how you use this website. These cookies will be stored in your browser only with your consent. You also have the option to opt-out of these cookies. But opting out of some of these cookies may have an effect on your browsing experience.
Necessary Always Enabled
Necessary cookies are absolutely essential for the website to function properly. This category only includes cookies that ensures basic functionalities and security features of the website. These cookies do not store any personal information.
Non-necessary
Any cookies that may not be particularly necessary for the website to function and is used specifically to collect user personal data via analytics, ads, other embedded contents are termed as non-necessary cookies. It is mandatory to procure user consent prior to running these cookies on your website.
SAVE & ACCEPT